How worrisome is inflation?

Yes, prices are trending higher, but an over-reaction could hurt more than it helps

For all the bad news the world has absorbed over the past year or so, Steve Wyett struggles with the inflation-related gloom and doom currently overshadowing the U.S. financial markets.

BOK Financial's® chief investment strategist understands that rising inflation is highly likely. And that will mean higher prices for all of us.

But such pressures will likely reflect successful COVID-19 vaccination efforts, a reopening of the economy and increased access to many of the activities that we've lived without since the pandemic's start, Wyett said.

And for that reason, he just can't subscribe to the overly cautionary tone that has prominent economists warning that inflation will derail the economic recovery and disrupt the financial system.

"We are so ready to be more mobile and start to enjoy and experience more of what we did before," Wyett said. "At this point, the benefits so far overwhelm the potential risk of inflation moving higher for some time, especially as we work to get back to where we were before the pandemic started."

That measured sentiment is echoed by Kimberly Bridges, director of financial planning at BOK Financial.

"While I recognize that high inflation over many years can negatively impact long-term financial plans, I don't sense that we're in a runaway inflation environment," she said.

"We don't need to panic, but it's a good reminder that your financial plan should protect you from inflation, which will affect the spending power of your nest egg, especially in retirement."
- Kimberly Bridges, director of financial planning at BOK Financial

As broad vaccination efforts have reduced worries around the potential impact of the COVID-19 pandemic, inflation anxiety has heightened for many.

For such a loathed concept, inflation's definition is difficult to pin down.

Some focus on the collective rise in prices on goods and services, which often result from increased consumer demand. This is captured in the monthly U.S. Bureau of Labor Statistics' Consumer Price Index, or CPI.

Other inflation watchers monitor the decline in the value of the U.S. dollar, which can result from an over-abundance of supply of the currency.

According to Wyett, both indicators are now in play.

First, the U.S. economy is well-poised for a continued snapback from the pandemic-caused recession of 2020—a point reinforced by the nonpartisan Congressional Budget Office's economic outlook in February. Second, the economy is also awash in cash after a year of near-zero interest rates from the U.S. Federal Reserve Bank and trillions of dollars of fiscal aid approved by Washington, including the $1.9 trillion package signed by President Biden this month.

Meanwhile, in the 12-month period ending in February, the CPI advanced 1.7%, a 12-month high. The core CPI, which many economists prefer because it strips out volatile energy and food costs, gained 1.3%. Broad market expectations, however, for the average inflation rate over the next five years surpassed 2.5% by mid-March.

Since the CPI and core CPI reflect price movements in a basket of goods, Bridges said it may not be an accurate reflection of your household spending. 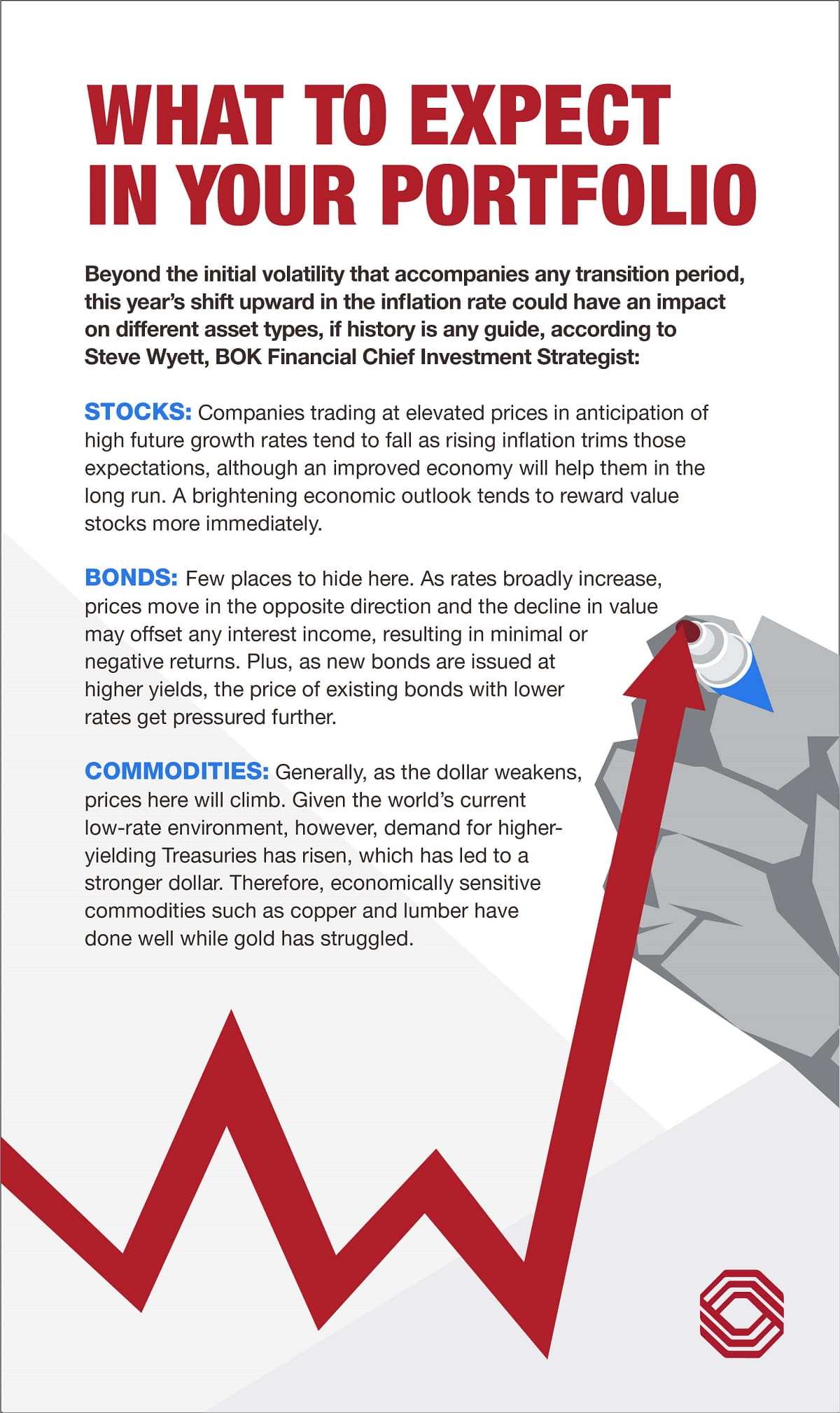 "What's most relevant to you is your personal inflation rate, which is based on your consumption habits," she said. "If you're traveling a lot, you'll notice higher fuel prices. If you buy a lot of groceries, you'll be dealing with higher food prices.

"If you're renovating your home, you'll notice higher prices on building materials. But if your car usually just sits in the garage, you won't feel higher gasoline prices as much. And if you own your home, you won't notice increased rents."

Consumers' expectations reflect those variations, according to the Federal Reserve Bank of New York, which conducts a monthly national survey on spending outlooks. In its March poll, the Bank found that respondents expect inflation to run at 3.1% over the coming year, driven by a 9.6% rise in the price of gasoline and 9.0% increase in rents. Conversely, inflation expectations for food prices, healthcare and college educations costs ran 0.3% or lower.

Navigating the way ahead

One effect of rising inflation that touches most of us is higher interest rates. For example, as the yield on the 10-year U.S. Treasury bond, which started 2021 at 0.92%, jumped to 1.61% by March 15, mortgage rates rose from their all-time lows.

In addition, businesses have begun weighing the impact of higher lending rates, and bond prices, which decline when interest rates rise, dropped.

Stocks also took a breather from a nearly year-long rally, and Bridges saw the broader reaction as an opportunity to reinforce the value of planning for a wide assortment of conditions.

"The negative impact of inflation over long periods can be detrimental," she said. "What it really comes down to is that your portfolio's performance needs to beat the rate of inflation."

To protect your retirement plan from inflation, Bridges suggests:

She added that younger individuals can also lay the groundwork for their inflation-savvy future selves by developing multiple streams of income, such as Social Security or pension income (or both), distributions from an individual retirement account, earnings from an investment portfolio or annuity and collecting rent on owned property.

As for the composition of your investment portfolio, Wyett said it's worth tweaking allocations in response to inflationary trends, especially with new investments, but dramatic and over-sized moves rarely work out.

Consider gold, which in inflationary times tends to rise in value as the dollar drops. Yet through the first two months of 2021, the price of gold declined as the abrupt rise in Treasury interest rates made investing in the dollar more attractive, especially to global investors whose alternatives offered paltry rates.

“Consider the long-term—you'll still need some growth, which equities provide. As for bonds, you're now more aware that rising interest rates and inflation are detrimental to their value, but converting everything to cash or gold or anything else doesn't protect you from that.”
- Steve Wyett, chief investment strategist

"Consider the long-term—you'll still need some growth, which equities provide," Wyett said. "As for bonds, you're now more aware that rising interest rates and inflation are detrimental to their value, but converting everything to cash or gold or anything else doesn't protect you from that."

And conditions could level out. The employment market is still in the early stages of recovery, which helps keep the lid on labor cost increases—a key factor in company expenses.

"Many see this as a period of reflation, where we're getting back to where we were before," he said. "But that doesn't necessarily mean that inflation will keep going up at that pace."

While current inflationary trends may be jarring to those who've grown accustomed to tepid price increases over the past decade, they're stirring memories of runaway inflation for others.

When Steve Wyett entered the investment world in the early 1980s, yields on U.S. Treasuries were in the double digits and investors looked to stocks to post aggressive returns to compensate for high inflation.

Conditions weren't as treacherous a decade or so ago, but Kim Bridges recalls plugging a 4.5% expected inflation rate into her financial planning software, nearly double the 2.39% she uses now. Given current conditions, she's reminding people to stay nimble.

"If you're still in what's known as the accumulation phase of your life, keep working and try to ensure that your income goes up at least the rate of inflation each year. Within your portfolio, you can invest more aggressively, seeking growth for future spending," Bridges said.

"When you transition to retirement, that's where inflation is scary. You can dial back the risk in your portfolio, but be sure you are seeking to outpace inflation or you may suffer a loss in spending power.

"That's where you need to be careful with fixed income investments, because they may not keep up." 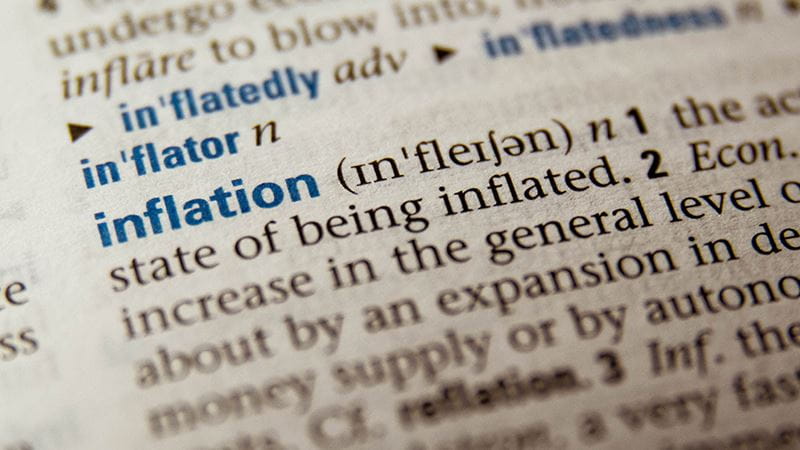 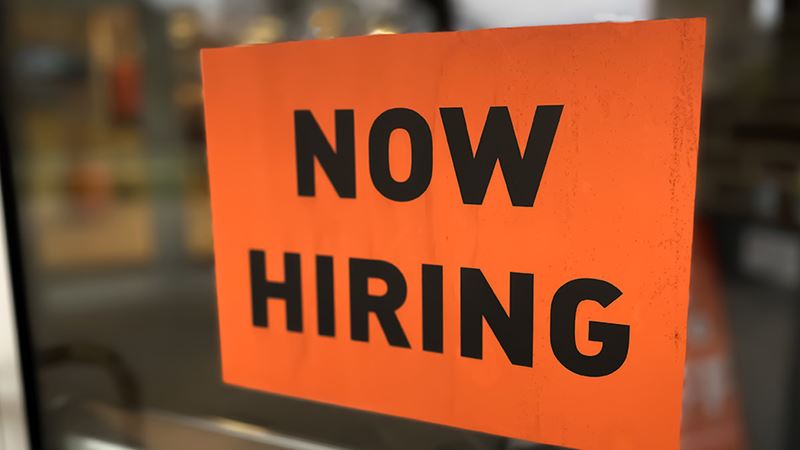