Slower start, but sunny skies ahead for Arizona economy

Although Arizona's economic growth in 2022 may fall short of previous years, experts predict that the smaller gains this year are just a bump in the road on the way to stronger growth to come.

For example, personal income in the Phoenix-Mesa-Scottsdale area, the largest metropolitan region of the state, is only expected to grow by 0.2% from 2021 to 2022, according to the University of Arizona Eller College of Management's most recent Arizona Economic Forecast, published in November 2021. That's the smallest increase in any of the years included in that quarter's forecast (2020-2024).

It's no cause for alarm, given the inflated incomes in previous years due to COVID-19-related economic stimulus payments, said Christine Nowaczyk, Arizona corporate banking executive for BOK Financial®.

Moreover, personal income growth in the Phoenix area is expected to rebound to a 5.8% increase from 2022 to 2023, the University of Arizona's Economic Forecast predicts. Nowaczyk, too, believes that Maricopa County will see strong growth in income in years to come.

"We're also starting to see an influx of higher paying wages due to all of the technology businesses that are relocating or forming here in the state," she said. "There are a couple of pockets that are really, really strong." 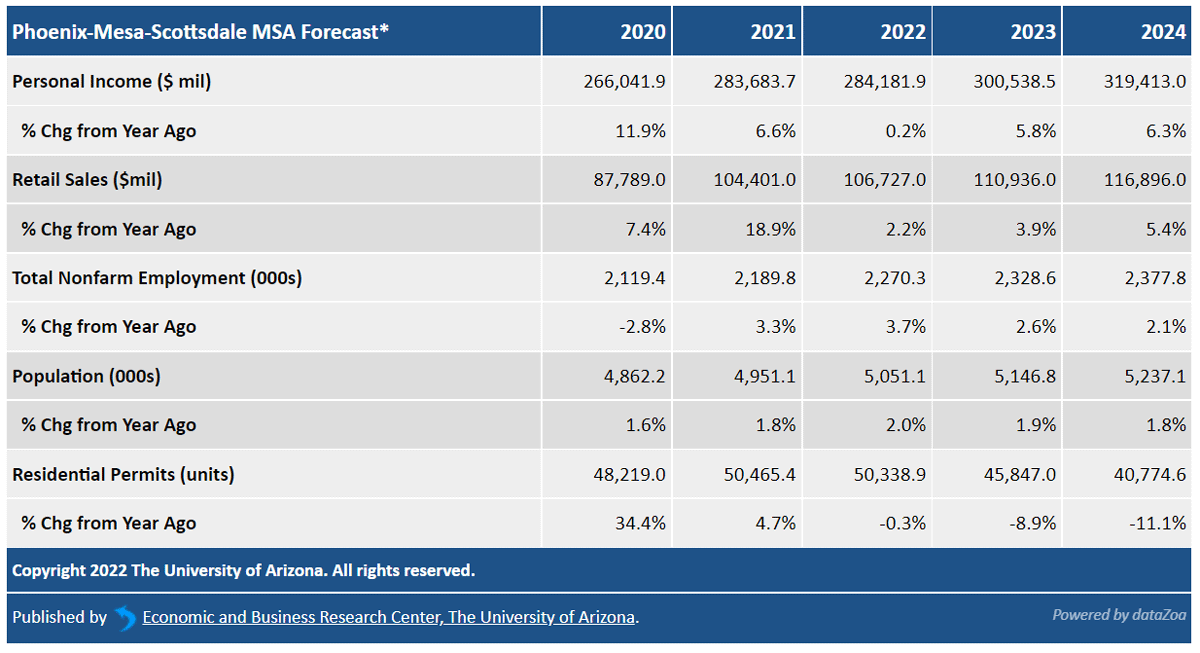 Even in the 2021 fiscal year, a time when most states were just trying to bounce back from the pandemic, the Arizona Commerce Authority (ACA) won 106 business development projects that are projected to create 23,317 new jobs in the state at an average salary of $66,337, as well as $24.81 billion in capital investments, according to the economic development agency's annual report.

One major growth area, particularly in the Phoenix area, is the semiconductor industry. The greater Phoenix area is home to more than 75 semiconductor and related-device manufacturing operations, according to the Greater Phoenix Economic Council's (GPEC) 2021 report on the industry. And there's more to come. In March 2021, Intel announced it would invest $20 billion in the metropolitan area to build two new fabrication plants that will create 3,000 new high-tech jobs and 3,000 construction jobs.

Other growth areas for Phoenix include electronic vehicles and the biosciences, according to Nowaczyk. That business growth, combined with the in-migration of people and companies from other states, makes the overall outlook for the state very optimistic, she said.