Despite rocky outlook for 2022, New Mexico poised for steady growth

Like its neighbor Arizona, New Mexico is expected to experience economic growth from technology sectors in years to come.

In the short term, however, the state is experiencing a more difficult economic recovery from the pandemic than the nation as a whole. New Mexico had the second-largest increase in initial unemployment claims from Mar. 15, 2021, to Jan. 24, 2022, compared to before the pandemic (Mar. 18, 2019, to Jan. 27, 2020), according to Feb. 3 data from WalletHub.

Meanwhile, income patterns are expected to decline statewide by 5.5% this year, according to the University of New Mexico (UNM) Bureau of Business and Economic Research's August 2021 economic forecast.

Those figures are in line with what Jennifer Thomas, CEO for Bank of Albuquerque, is seeing for the state. The state government took a slower approach to lifting pandemic policies, such as the mask mandate, because of how quickly the healthcare system was overwhelmed by COVID-19, Thomas explained.

Still, experts say New Mexico's bumpy economic growth in 2022 will likely smooth out going forward, experts predict. For example, despite declining this year, income patterns are forecast to grow by 4.7% each year from 2023 to 2026, according to the UNM economic forecast. 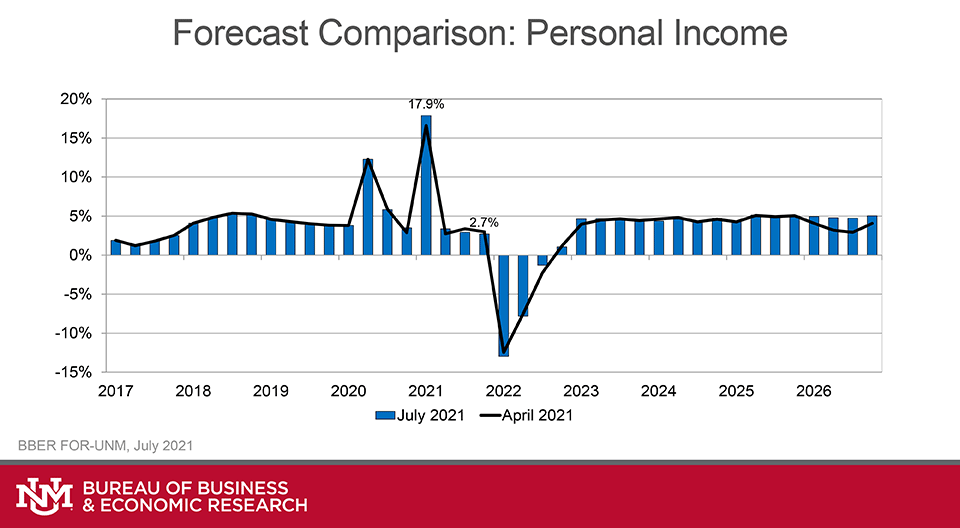 Other potential upsides for the state include an influx of dollars from the federal Infrastructure Investment and Jobs Act. Under the legislation, New Mexico could receive $2.5 billion for federal-aid highway apportioned programs and $225 million for bridge replacement and repairs over five years, according to the White House's fact sheet for the state. Thomas also expects to see economic growth in the state from national laboratories, as well as the space and defense industries.

Space tourism—that is, commercial travel to space such as through Spaceport America, the world's first purpose-built Spaceport, located near Truth or Consequences, N.M—"is still very tiny, but it's growing. People are very excited about it," she said.

However, the Spaceport hasn't had much impact on the Albuquerque economy so far, according to Thomas, due to its location 180 miles south of the city. "As space travel picks up, that might change. Virgin Galactic has announced tickets for sale starting this month for a cool $450,000."